I have been a customer of yours since my first son was born in July 2007, and you have many wonderful products. Something that I really really really wish you sold though, was sleep. Actual sleep, restful sleep. I'm starting to forget what it's like!

My second son Isaac was born in August 2009, and he's a terrible sleeper. Where I'm stuck is during the night. He goes to bed fine. I feed him about 30 mins before bed, and put him in his cot awake.

He'll wake about 2-3 hours later, and then I'm up every 2-3 hours during the night. Last night he was up 5 or 6 times, sometimes hourly.

He's a big boy, 11kg at 6 months and he's really really hungry. I pick him up during the night and he truly seems hungry, he nuzzles into my shoulder and squawks until I give in and feed him. Once I thought maybe it was teething (he has 4), but pamol didn't make a difference.

If I put him down without feeding him, he screams. Really really screams, which breaks my heart and wakes his brother up, which just creates more problems.

I don't know what to do. I am so tired, what I wouldn't give for a good night's sleep.

Where does Isaac sleep? ie your room or his? If in his own room, is the door shut?

Isaac sleeps in a cot in his own room. We usually leave the door open, (both day and night). His room is between our room and his brother's room.

We have an Angelcare sound/movement monitor, but I don't use the sound part as I can hear him from our room and the rest of the house without it.

He sleeps in a Merino Kids Go Go bag (summer weight at the moment). Currently in long sleeve pyjamas, but no other blankets.

Does he move about a lot in bed? Could this be an issue?

He likes to sleep sideways in the cot with his head right up against the bars. Other than that he doesn't seem to move around much.

Tell me about your routine and sleep times in the day, and how do you settle him in the day?

Our day routine is fairly flexible. He has 3 to 4 day sleeps (depending on how long the sleeps are), but the timings depend on when he seems to be tired.

If I watch for signs that he's getting tired he goes down ok, and will usually self settle. Sometimes he'll sleep for 1 to 2.5 hours, sometimes only for 30-45 mins.

The shorter sleeps I have tried waiting to see if he'll settle again but he rarely does. I've never been a strict routine person that must feed/sleep baby at certain times, but we do follow the same "pattern" each day.

What sleep training have you tried to solve to night waking and for how long did you stick to it?

Haven't tried any kind of sleep training, as I really don't know where to start.

Is he eating solids well in the day?

He's still not eating much in the way of solids. I try every day, but he spits most of it out. Isaac's brother Liam was similar at the same age, and plunket advised not to force it, so I've been doing the same with Isaac.

What time does he wake in the morning and go to bed at night?

Isaac usually wakes around 6.30-7.00am, and goes to bed between 7.00-7.30pm. I feed him about 15-30mins before bed, and he goes down in his cot while he's awake. Occasionally he won't settle, so I'll get him back up out of bed for maybe half an hour, then put him back down still awake and he's fine.

Is there anything you’re not prepared to try???

I don't like the idea of letting him cry (and I think he's maybe still a little bit young), but I would be willing try if it was the only thing that might work. Otherwise happy to give anything a go.

Our recommended solution for Isaac

All babies wakes every couple of hours in the night, and they 'sleep through' when they can get back to sleep without help each time they wake.

So when Isaac cries and wants to be fed in the night, this is a habit he has formed as it is how he relies on getting back to sleep each time he wakes. It doesn't mean he is hungry necessarily or that he needs the milk, more that feeding is how he knows to resettle. The longer he continues to be fed to get back to sleep...the more reinforced this habit becomes. he is not likely to start self settling in the night unless the night feeds stop! 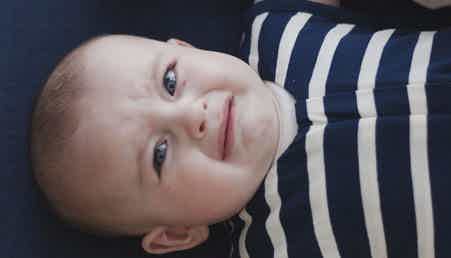 For starters, Isaac's parents need to decide not to use feeding as a settling tool during the night any longer. Making this decision is a big step, and parents usually assume it will be much harder than it is.

Then having decided that, they will need to choose a technique to show Issac they expect him to self settle each time he wakes. Given Isaac knows how to self settle at bedtime, it will be surprising how quickly he will learn to use his self settling skills when it is made clear to him that's what his parents now expect.

We recommend using the 'verbal reassurance' technique, which is showed brilliantly on the Sleepeasy Solution DVD. The technique works the quickest that we know, and generally teaches babies to self settle in 3-4 nights. With Issac it may be even quicker, since he has the skills already...and just needs to learn to use them all night (not just at bedtime!).

Verbal reassurance means giving your child the opportunity to self settle, rather than doing something to them or for them to get them back to sleep. Wait 5 minutes before going in, then just go part-way into the room, say your phrase and leave eg 'mummy knows you can go back to sleep, see you in the morning'. . Shut the door and go to the other end of the house. Yes your child will cry and protest, as they have had months of being told they need a feed to go back to sleep..... Wait 5 mins, then repeat. Then wait 10 mins and repeat. Then 15 mins and repeat.

For verbal reassurance to work quickly, Isaac's parents will need to be very consistent in what they show Issac they expect. So use the above technique each and every time he wakes in the night. It would be easy to fall into the trap of thinking he may need a feed in the night...or he has done well to self settle 3 times, so now it's 5am I will feed him. But this will in fact confuse Isaac and undo some of what he has learned. We recommend Issac's parent do not offer any feeds for settling in the night, instead wait until the morning for his first feed.

It will be a good idea for Isaac's parents to shut his bedroom door. And during the night, we recommend also shutting mum & dad's bedroom door. They make also want to use ear-plugs since their bedroom is right next door. This could be useful just for the first night or two while they are teaching Isaac to use his self settling skills. Their toddler will likely be disturbed by Isaac learning to self settle during the night...but as he is likely to learn quickly, and overall disturbance will be much reduced from the constant waking that Isaac is currently doing!

Isaac's parents will find that his appetite quickly improves during the day when he is no longer having numerous feeds during the night. At the moment so much of his calorie needs are being filled by night milk feeds, he just doesn't need much food during the day!

We also recommend looking at Issac's sleeping bag to ensure he is warm enough. If his room falls below 18 degrees, he will need a winter weight bag.

Also they could look at whether he is comfortable sleeping with his head up against the side of the bars. If he would be more comfortable in the middle of the cot, either a Safe T Sleep or Babe Sleeper would be useful for keeping him settled in one place.

We also recommend introducing a comforter, so Isaac has a tool to help himself with self settling. We recommend Cuski as they can absorb Mum's scent and are made from breathable fabric.

Playing some white noise on repeat all night is also likely to help make the self settling happen quicker. Baby's First White Noise is a great CD as it sounds like sssssshhhhh or something soothing like Baby's Ocean Waves is a good one.

The final thing we recommend Isaac's parents do is to look at Isaac's daytime routine. Babies of that age usually do far better with a structured routine, so they know what is expected and their little body clock's become used to what happens when.

Life will also be easier for Isaac's mum when she knows when he will need a sleep, so she can plan when to go out and work around what else she is doing with her toddler.

Here's what we recommend for babies around that age:

I would just like to thank you so much for publishing that case study on the 9month old baby waking several times during the night Zaria is 7months old and she was sleeping till 5am then she started teething and wouldn't sleep through the night.

She was waking twice during the night and I just didn't know what to do to get her to sleep through.

After reading that article we tried it that night. The first night she woke at 1am and cried off and on for an hour using your technique. It sucked listening to her cry that long but she did go back to sleep.

We have now had over a week of Zaria sleeping till 6.30. I'm so glad I found your website, the products we have bought have been great esp the miracle blanket and the sleep info is brilliant. I haven't found anywhere or anyone else to give info that feels right and you know you can trust.

Thank you so so so much. 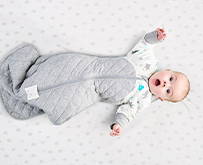 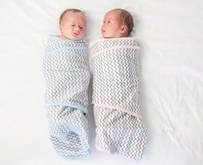 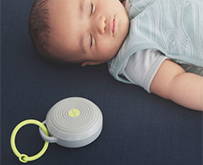 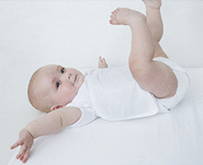 Gently Encourage your Baby to Self Settle

BACK TO SLEEP ADVICE
×